Many fans in Chicago are wondering, “When are the Chicago Bulls going to become contenders again?”. The Bulls have been rebuilding ever since trading away Jimmy Butler for Zach Lavine, Lauri Markkanen, and Kris Dunn, which happened after the 2016-2017 season experiment to form a “Big 3” of Butler, Rajon Rondo, and Dwayne Wade. After winning only a combined 71 games from 2017 through the COVID-19 stoppage in March 2020, the Bulls made a change, firing General Manager Gar Forman and reassigning basketball operations Vice President John Paxson. They hired Marc Eversley and Arturas Karnisovas to Forman and Paxson’s respective positions, leaving fans with hope that the Bulls can become contenders soon.

With Karnisovas expected to be the brains behind the Bulls’ operation as the new basketball operations VP, he will need to evaluate the Bulls’ young core to see which player or players are worth keeping as franchise cornerstones. Previously, Karnisovas was the General Manager for the Denver Nuggets, arriving there first in 2013 as an assistant GM. To the Bulls, he brings an accomplished resume, a solid draft record, respect from all around the league, and strong ties to the European basketball world, where he started his own basketball career. Karnisovas anchored the Nuggets around a couple of great draft picks in Jokic and Murray, as well as solid free agent signings in Millsap and Will Barton. Overall, he used a combination of developing value draft picks and signing high level free agents to round out the roster. Karnisovas could bring that strategy to the Bulls, but as a new executive in the front office, he will have to make decisions on who to anchor the team around, given the talent already at hand.

Out of Chicago’s young team, Zach Lavine has taken over as the star, averaging 25.5 points per game during the current 2019-2020 NBA season. He has been a high-level scorer, but questions still surround him. Can he be the first option on a playoff team? Will his defense become more than a liability? Can he be the star to build around? There are many positives for Lavine. He is still just 25 years old and ranks in the top 25 in the NBA this season for offensive box plus/minus, points scored per game, and points scored per 100 possessions. However, Lavine ranks outside the top 100 in the NBA in multiple advanced stats, such as: points added by field goal shooting, defensive box plus/minus, and both Offensive and Defensive Rating. While it is clear that Lavine has been the best player for the Bulls this season, many advanced metrics suggest his stats could just be empty stats as a result of a bad team.

Other than Lavine, Karnisovas has multiple options to anchor the franchise around. Three straight 7th overall picks in Coby White, Wendell Carter Jr., and Lauri Markkanen provide an intriguing young core. Markkanen has shown potential as a shooting big and stretch four for the Bulls, and Carter has shown potential as a rim protector with outside shooting skills. However, both have been injured often in their young careers and have not been able to take on a lead role on the team, so they are less likely options as franchise cornerstones. White struggled to begin his rookie year, but burst after the All-Star break, averaging 24.7 points per game and shooting 46% from the field. While some advanced stats are not on White’s side (only an 11.9 Player Efficiency Rating), his 10 games after the All-Star break displayed his flashing speed and electric scoring ability, as he posted a positive box plus/minus in 7 out of those 10 games. However, White will need to develop more consistency and playmaking to get to an All-Star level, which is attainable given that he was only a rookie in a shortened 2019-2020 season.

While Karnisovas has multiple options to build around, a strong way to compare them is through advanced metrics. Usage Rate is a good way to determine the percentage of team plays a player used while he was on the court. Player Efficiency Rating (PER) encapsulates the good and bad of a player’s performance. A higher Usage Rate and more games played usually leads to a smaller PER because a player is asked to handle more of the team’s possessions, watering down their efficiency. However, a star can achieve a high PER with a high Usage Rate, meaning they are used a lot and still efficiently helping the team.

Here is a plot of the Bulls’ players’ Usage Rate vs PER vs Games Played:* 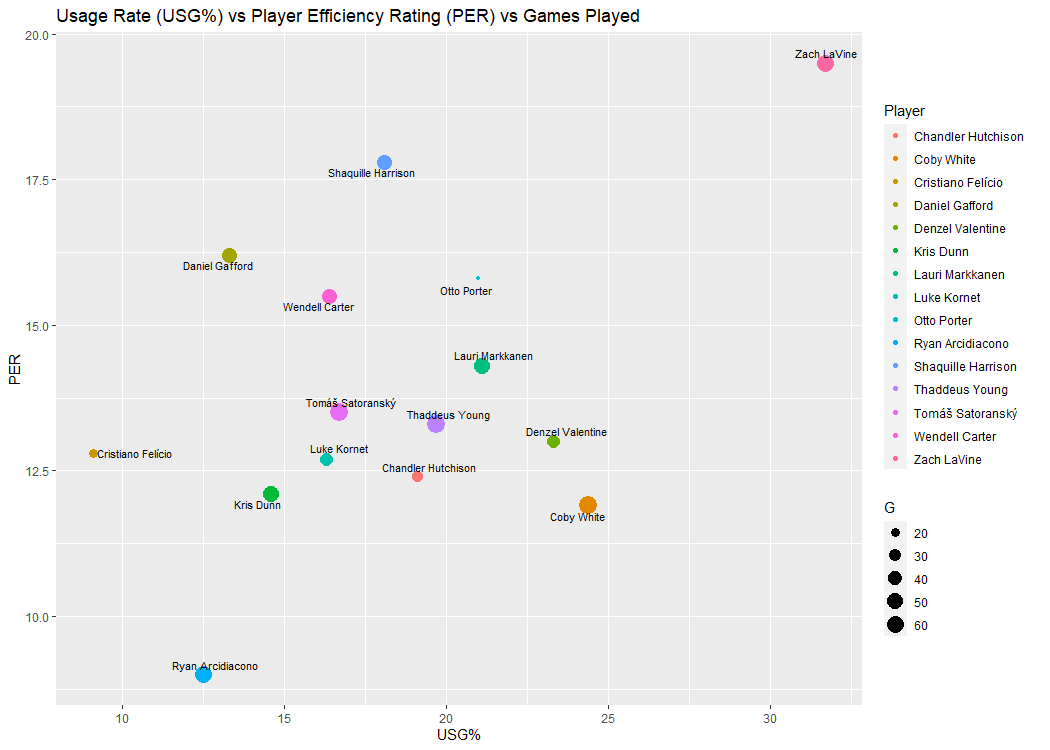 In the plot, Zach Lavine is shown to be the most ideal star for the Bulls. Lavine has the highest Usage Rate on the team and the highest PER. Behind him, Coby White has the second highest Usage Rate, played in all 65 games for the Bulls this season, and accordingly, his efficiency has been watered down for a lower PER. Both Carter and Markkanen are in the middle of the pack, and the Bulls roster follows the perception that a higher Usage Rate leads to a lower PER for the most part, with the major exception being Lavine. 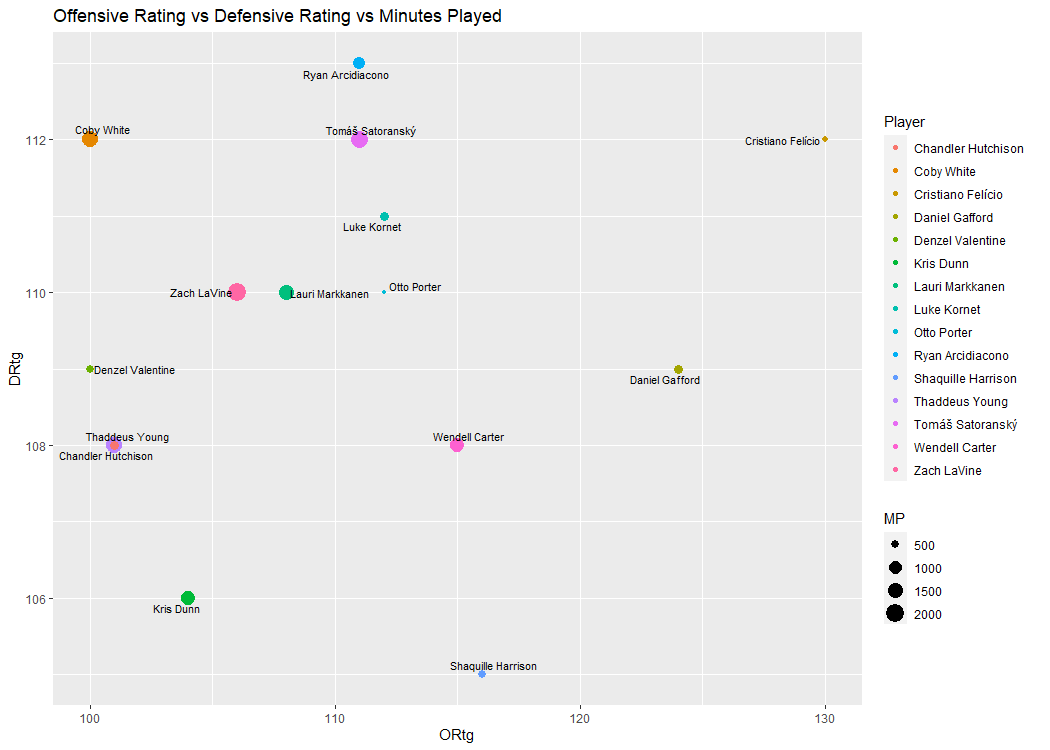 Offensive and Defensive Rating, like PER, can be skewed by playing time, so a few of the outliers on the plot are not potential stars, as they do not receive many minutes. Out of the four players that were discussed earlier as potential franchise cornerstones for the Bulls, Wendell Carter Jr. is in the best spot in this plot, with a top four Offensive Rating and top three Defensive Rating on the team. However, he missed many games due to injury this season and was lower on the Usage Rate vs PER plot, which knocks him down a peg as a potential franchise cornerstone. None of the other three players discussed earlier have a positive positioning here, including Zach Lavine, who has a low Offensive Rating despite scoring the most on the team this season, and a low Defensive Rating, as he has been known to be a below average defender.

There are many factors that will go into Karnisovas’ decisions this upcoming offseason. The COVID-19 pandemic has delayed many dates for the NBA, which could impact how Karnisovas wants to handle the roster. Additionally, the coaching situation can have an impact, considering ownership wants to keep Jim Boylen as the head coach of the Bulls, but multiple players have expressed distrust in Boylen, including Lavine and Markkanen. Karnisovas could also look outside the team for the franchise cornerstone. In the upcoming 2020 draft, LaMelo Ball, Deni Avdija, and Killian Hayes are all top options for the Bulls. If they get lucky in the draft lottery, they could draft a player like Ball to be the future of the franchise. Karnisovas could also choose to keep the team intact this year, and make the franchise cornerstone decision next year, with the 2021 free agency and draft classes hailed as the deepest in years. He could dip into the stacked 2021 free agency class to find a Paul Millsap for the Bulls, and draft from the highly touted 2021 draft class to find a Jamal Murray or Nikola Jokic.

Overall, Karnisovas has multiple options to build the Bulls around: Zach Lavine, the Bulls’ best player this season, Coby White, who flashed star potential before the COVID-19 stoppage, a high draft pick from the 2020 draft class, or a player from the deep 2021 free agency and draft pools. Lauri Markkanen and Wendell Carter Jr. are part of the Bulls’ young core and have shown potential, but durability and consistency issues show that they are better fitted as quality surrounding pieces for the roster, like Gary Harris was for Karnisovas’ tenure with the Nuggets. Whichever direction is chosen, the Bulls are desperate for an infusion of playmaking and defense in all areas.  Lavine displayed star caliber tools through his scoring efficiency this season, as shown in the Usage Rate and PER plot. However, Karnisovas will have to determine if Lavine can take the next step and become a more productive player overall for the team, rather than a one-dimensional scorer, as his Offensive and Defensive Ratings were lackluster. Coby White is young and showed plenty of scoring and playmaking potential in college; he has the chance to be developed into a better player than Lavine. Even though multiple advanced metrics do not support Lavine or White, metrics are not the end-all determinant of a player, and both players had many positives this season to contribute to their franchise cornerstone argument. Ultimately, Zach Lavine looks like the most obvious option to build around for Karnisovas and the Bulls, but a deeper dive shows he has flaws many NBA stars do not have. Moving forward, it won’t be Zach LaVine with the reigns to the rebuild, it’s not Coby White, it’s not Lauri Markkanen either, it is Arturas Karnisovas, and Chicago should be excited about that.