“Trust the Process” has been the motto for the Philadelphia 76ers for the past few years, but the process has been in question recently. After getting swept in the first round of the 2019-2020 playoffs at the hands of the Boston Celtics, the 76ers fired head coach Brett Brown and will have to reevaluate their team going forward. General Manager Elton Brand is likely to keep stars Joel Embiid and Ben Simmons on the team, but surrounding pieces like Tobias Harris and Josh Richardson could be involved in trade talks down the road. Brand will also have to launch a coaching search into a candidate that can reign in the locker room and utilize the vast young talent on the team.

While Ben Simmons and Joel Embiid are confirmed stars, the Sixers have faced up-and-down performances from starters like Tobias Harris and Al Horford, who are still solid players, but not what they once were. Behind the top 4 of Simmons, Embiid, Horford, and Harris, Philadelphia had a combination of youth and veterans that contributed to their run this season. Shake Milton was a plus shooter in the backcourt, shooting 43% from 3-Point range, while Matisse Thybulle had a team-best 3.1 Defensive Box Plus/Minus. Josh Richardson and Alec Burks were key veteran scorers who complemented the lineup well. Despite the contributions of these players, the 76ers still failed to make an impact in the playoffs and identifying current players to utilize for their future will be key for the team going forward. 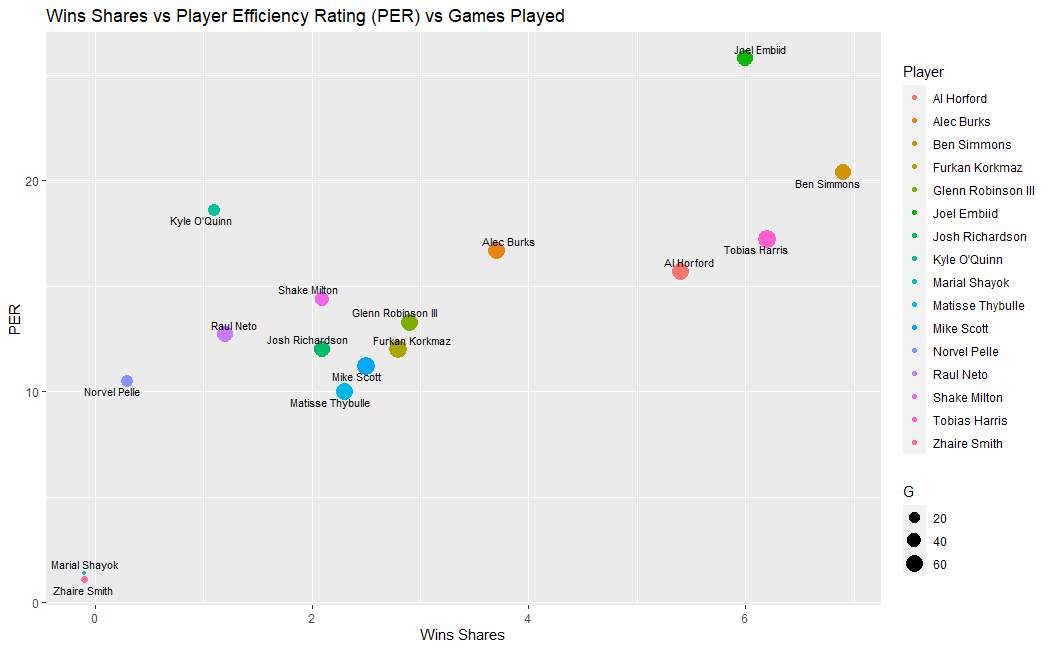 Throughout the season, Embiid and Simmons were the clear top players on the team while Horford and Harris were the next best, with a high combination of Win Shares and Player Efficiency Rating compared to the rest of the team. Much of the rest of the team, however, was clumped with a below average PER (league average is 15), and 2 – 3 Win Shares on a 43-win team. While players like Richardson and Milton were still producing for the team, the Sixers’ production seemed front-loaded with a star group that was inconsistent at times. Unfortunately for Elton Brand, he will have trouble adding new players due to lack of cap space, as Simmons, Embiid, Harris and Horford are all owed at least $26 million dollars per player over the next 3 years. Brand may have to move around cheaper, younger assets like Milton and Furkan Korkmaz and pair them with Harris or Horford in a trade to shuffle the roster and free up cap space to sign more premier free agents.

Identifying overall team needs will be a part of Brand’s roster overview this offseason. A major need for the 76ers that became evident was their lack of consistent jumpshot – making.

Graph of Shooting for Playoff Teams: 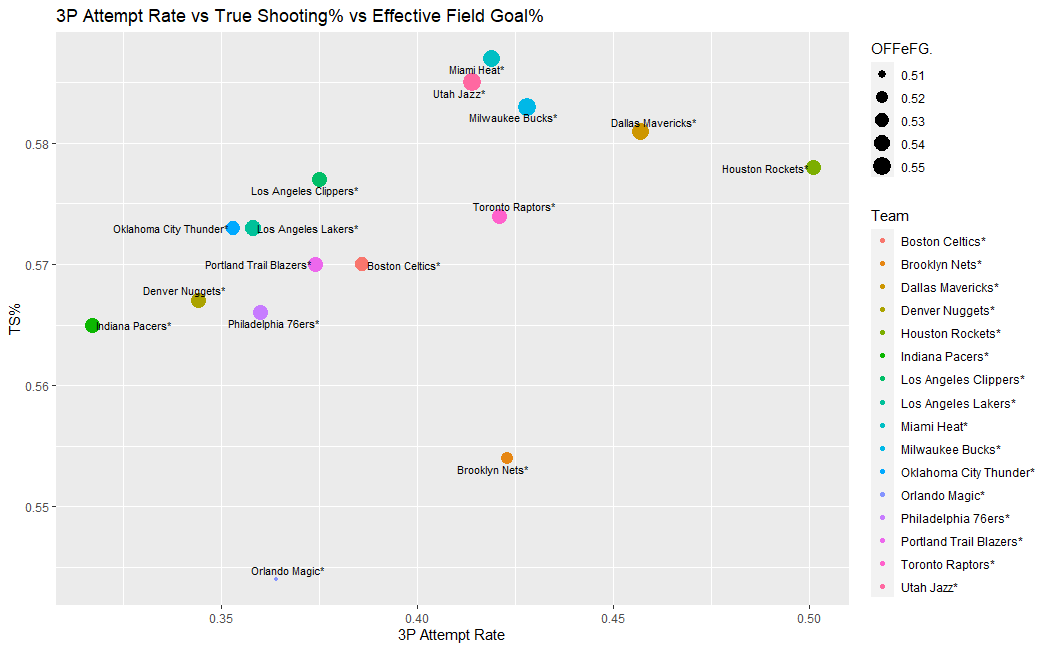 As shown from the plot, the Sixers ranked in the bottom half of playoff teams for 3 Point Attempt Rate, True Shooting %, and Effective Field Goal % this season. They were not shooting or making shots (or Free Throws) from outside enough to keep up with other teams. For example, their first-round opponent, the Boston Celtics, ranked higher on this plot, with just a slightly lower Effective Field Goal %. While players like Shake Milton provided relief from outside, there was not enough consistency, especially from the stars of the team. Simmons only had a 0.11% 3P Attempt Rate, while Embiid’s was 21.5%, both in the bottom three of the team. The 76ers have shown a need for a more proven, consistent shooter. Last season, JJ Redick was that type of player for them, and they need a player or two like Redick to provide a constant threat from outside. Milton could step into the role, and Burks could be re-signed, but there are bigger fish in free agency and the draft. Free agents like Joe Harris and Fred VanVleet would add shooting to the team, but the Sixers would have to shuffle around large contracts in order to pursue them. Through the draft, the Sixers could use their mid-first rounder or one of their several second rounders on a good outside shooter, like Jahmi’us Ramsey or Skylar Mays. Getting a scorer for outside the paint should be at the forefront of Elton Brand’s mind this coming offseason.

The 76ers will also need to look for a coach that can corral the team and help them jell. Brett Brown was the head coach for seven seasons but was unable to push the team over the top with the current talent. Some coaching options for the Sixers include current assistant Ime Udoka, Clippers assistant Ty Lue, former Nets coach Kenny Atkinson, and Raptors assistant Adrian Griffin, among others. Elton Brand could look to a particularly player-friendly coach, like Lue, look for familiarity, like Udoka, or look for prior success in general. Above all, however, he will need to look for a coach that can control the team and garner the attention of the players while getting them to perform as a cohesive unit. Earlier in the season, the 76ers and Brett Brown had trouble with team chemistry, and it showed at points throughout the season. So, a good coach for team chemistry is crucial for the Sixers to find this offseason.

With “the process” behind them, Philadelphia will look to compete in the upcoming seasons. Behind their core stars, Ben Simmons and Joel Embiid, the team will have to add consistent shooting and a new coach, all while making sure they have enough money to spend in order to get needed upgrades. The 76ers’ future will rely on management’s financial shuffling, as well as team chemistry among the stars.